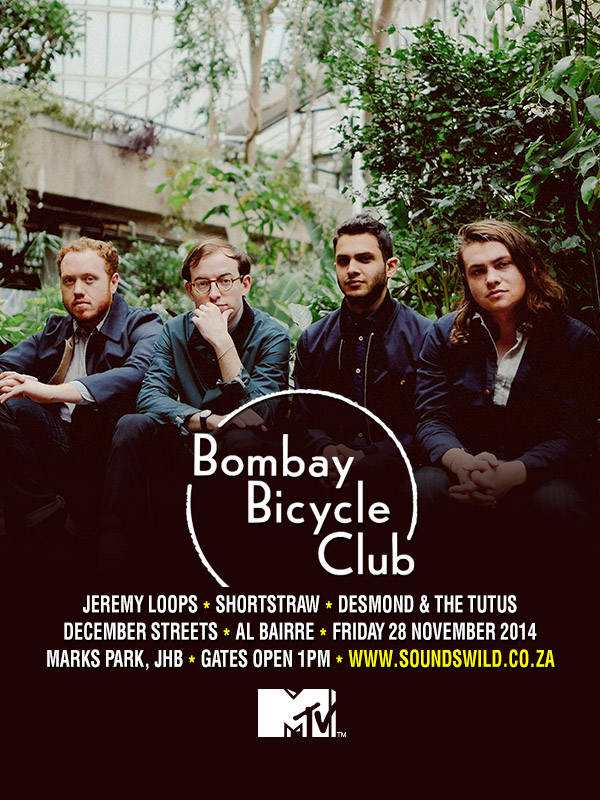 SOUNDS WILD kicks off your Summer Holiday with the ultimate outdoor party on Friday 28 November  at Marks Park in Emmarentia!Your International headliner for the event are none other than the incredible Bombay Bicycle Club, who’ll be heading to SA for the first time, escaping the UK winter for our Summer Sun. Bombay Bicycle Club will be joined by top local acts Jeremy Loops, Shortstraw, Desmond & The Tutus, December Streets and Al Bairre.

“Last year November we hosted Parklife, which pulled in a vast crowd and made for a great summer festival. We felt that Parklife has developed an identity and next year in April we will have an amazing event but November is a great time to wind down before December, so it was necessary to have another fest with a slightly greater emphasis on a party feel . We’re very excited to have Bombay Bicycle Club as our headliner along with some of the best current indie bands. This year all acts will be playing on one stage and SOUNDS WILD promises to be an afternoon and evening of fun and great music.”, comments Festival Director, Damon Forbes.

Bombay Bicycle Club performed at some of the biggest UK festivals such as Latitude, Reading, Leads and Glastonbury this year, along with Lollapalooza in the US. Their new album ‘So Long, See You Tomorrow’ has also just been nominated for the 2014 Mercury Prize.

Get your EARLY BIRD tickets now at http://breakout.nutickets.co.za/soundswild before they sell out.