JOHANNESBURG (September 8th, 2013) – Breakout Management is excited to announce the return of SEETHER to South Africa for an Acoustic tour in November. 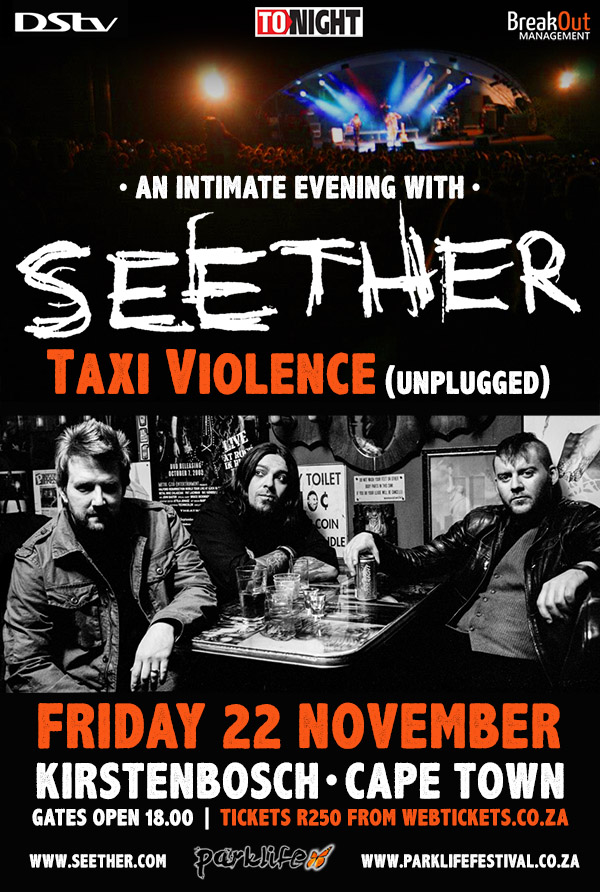 The band will embark on a unique, semi-acoustic tour, “An Intimate Evening With Seether”, performing in Cape Town and Durban, and then headlining the next PARKLIFE FESTIVAL in Johannesburg. These 3 shows will provide Seether fans with the ultimate backdrop to experience seeing the band with a storyteller-type atmosphere.

Local acts will be joining SEETHER on all 3 of the shows and already confirmed for PARKLIFE FESTIVAL in Johannesburg on the 24th of November, are The Dirty Skirts, ISO and Shortstraw. More local acts to be announced on https://www.facebook.com/ParklifeSA and on Twitter at @ParklifeSA.

In support of the tour, Seether will be releasing a career retrospective “Greatest Hits” double CD which will include a collection of their greatest songs along with three new tracks, rare b-sides and live tracks at the end of October. Album and track listing will be announced soon.

Early Bird Tickets for the ““An Intimate Evening With Seether” SA tour go on sale today (Sunday 8th of September) at 14:30 for a limited time only, so get your tickets on Webtickets: https://www.webtickets.co.za/event.aspx?itemid=406166901

Seether has sold millions of albums and singles worldwide, has over 63 million YouTube views and are mainstays in the touring circuit averaging more than 275 performances per year. They have had 11 #1 singles and 17 Top 5 hits across multiple formats at radio. Formed in Jo’Burg by Shaun Morgan and Dale Stewart, Seether made its initial impact on U.S. hearts and eardrums with the Gold album Disclaimer (2002). The album’s first single, “Fine Again” was a pensive ballad that resonated with fans worldwide. Seether gained nationwide live exposure with a spot on that year’s Ozzfest tour. Seether rerecorded the acoustic track “Broken” as an electric version featuring Evanescence vocalist Amy Lee. “Broken” became a massive international hit for the group. In 2004, Seether remixed and remastered Disclaimer, adding eight new songs and new cover art to create the two-disc set Disclaimer II, which is now twice Platinum. In 2005, Seether released Karma & Effect, which is certified Gold, approaching Platinum and followed that release up in 2006 with a live, acoustic CD/DVD, One Cold Night, which is now approaching Gold. In 2007 Seether released the Platinum Finding Beauty In Negative Spaces. The album was reissued in 2009 with a cover of George Michael’s “Careless Whisper,” and became another Platinum single release for the band. In 2011 Seether released Holding onto Strings Better Left to Fray. That album is approaching Gold status.

For More information on SEETHER and the tour, go to: