One Night in Africa – Oliver Mtukudzi and Friends 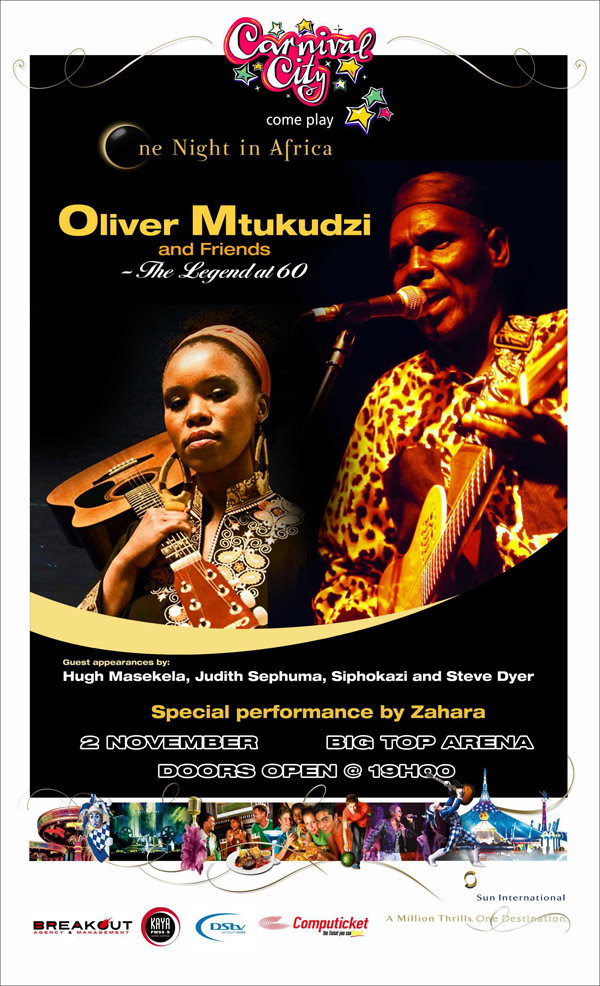 Few musical legends have achieved the kind of regional and international status as Oliver has. From the front cover of time magazine to his appointment as a UNICEF goodwill ambassador, Mtukudzi’s fame, stage craft and music prowess are legendary.

To celebrate these two incredible milestones Oliver invites all of his fans to his first performance in Johannesburg for 2012 for his 60th birthday performance which promises to be something very special as he invites his musical friends to guest with him on stage throughout the 120 minute performance. Stars such Judith Sephuma, Hugh Masekela, Siphokazi and Steve Dyer will join Oliver on stage for select songs as he plays the hits from a lifetime in music.

As one legend surveys his achievements and lifetime of music another legend emerges from the wings. Zahara who needs no introduction has arrived on the South African and international scene with a song and a drive that has left all others in her dust. Honoured to be on the same bill as Oliver as he celebrates his 60th birthday the show celebrates one legend and welcomes another into the spotlight as their lifetime in music begins.

Another ‘birthday’ worth noting is the one year anniversary of the launch of the One Night in Africa Series.

DStv were there one year ago for the inaugural concert at Carnival City in October 2011. The country’s leading cable brand, have a keen an eye for talent and entertainment brand building. The series that hosts hometown musical heroes and in this case legends has struck a chord with the DStv audience and who’s continued support of the brand has meant that it continues to grow and evolve into an event property that is synonymous with high end production value, musical collaborations and performances not to be missed.

It was the break away hit ‘Todii’ that cemented a love affair and relationship that has lasted almost two decades. Kaya Fm were the first radio station in the country to highlight the massive talent to the north of our borders by breaking the now well known single ‘Todii’. Kaya Fm have helped make Oliver a household name in South Africa and it was Oliver’s music that stuck resonance with Kaya’s commitment to quality African music that played a part in the development of Kaya’s massive audience and market share.

These relationships have been written in the stars by the stars.