One Night In Africa 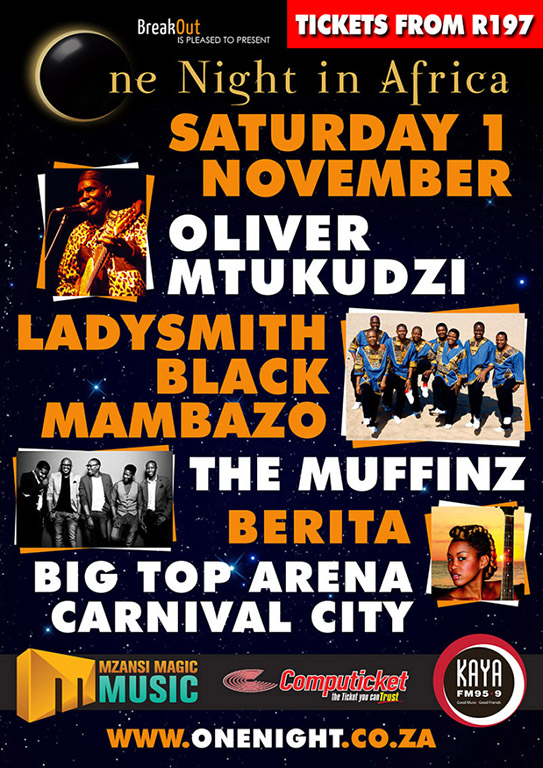 Ladysmith Black Mambazo is a world-wide recognized South African Acappella vocal group that has created a unique and spiritual sound that has touched a worldwide audience. Their musical efforts over the past five decades have garnered praise and accolades from a wide body of people, organizations and countries.

After gracing the international stages for many years and been honored and recognized world-wide, they will be embracing the stage at One Night in Africa, Big Top Arena Carnival City. Displaying what they have been showing the world.

Oliver Mtukudzi Greatest Hits show, is all about his well-known hits such as: Todii, Wasakara, Ndagarwa Nhaka, Mabasa, Neria (collaboration with Ladysmith Black Mambazo) and many more. This performance will showcase the sing-a-long nature of his songs and people dancing to the popular hits.

The Muffinz have unleashed their mysteriously beautiful world of eclectic soul to the South African public and they are set for world domination. The music of The Muffinz is so new, yet so soulful, so accessible, so honest and so innocent, that it appeals to all age groups, races, classes and sexes. The five young musicians make a refreshing change from the usual run of the mill rappers and house DJs, who are currently dominating the popular music scene, in that they play real instruments, and they play them well.

Berita is an award winning African singer, songwriter, and guitarist originally born in Bulawayo, Zimbabwe. She lived with her dairy farming parents and studied in New Zealand in her high school years. Berita currently resides in South Africa where she began her music career whilst pursuing her tertiary studies. Still a relative newcomer, her biggest dream is to become a stern voice that stands for growth, development and success of African women all around the continent.