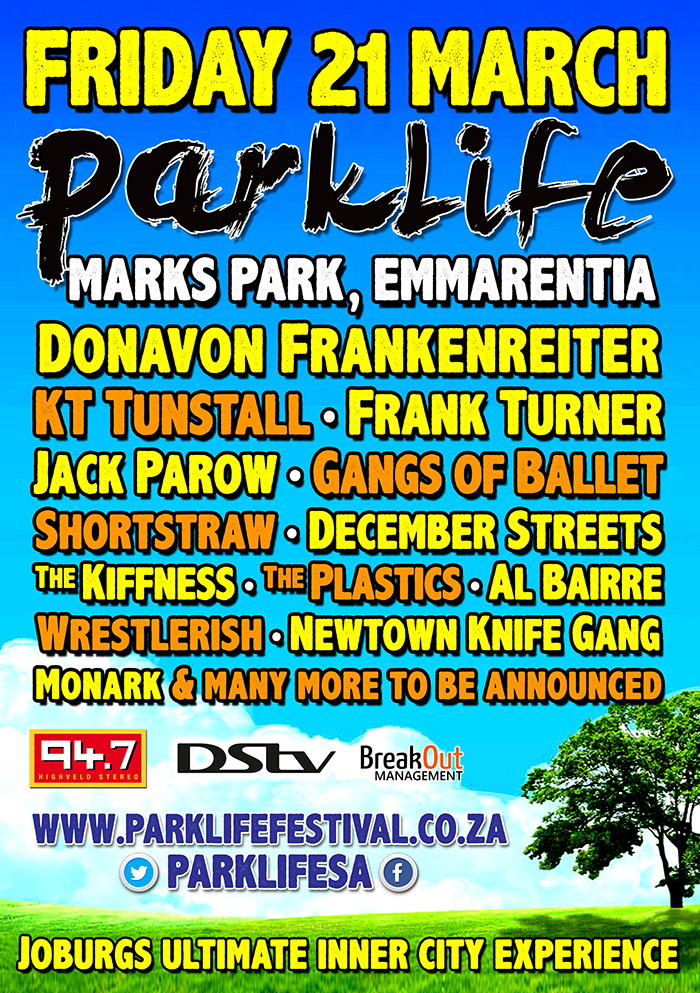 Johannesburg [5 February 2014] – Breakout Management and DStv are excited to announce the International headliners and line-up for the next PARKLIFE FESTIVAL in March!

Donavon Frankenreiter, KT Tunstall and Frank Turner will be headlining the PARKLIFE FESTIVAL on 21 March in Johannesburg, joined an incredible line-up of top local acts.

Frank Turner fans in SA have been bursting with excitement after news of him finally coming to SA spread on Social Media last week. Those who have followed Turner’s career since he went solo in 2005, won’t be surprised that the recurring theme throughout Tape Deck Heart, Frank Turner’s fifth album, is change…  After 1,400 incendiary live shows and four acclaimed albums, last year saw the musician previously known as a punk poet become (whisper it) a sort of pop star. From a fake Glastonbury Tor, Turner performed at the Olympics Opening Ceremony. He headlined Wembley Arena. He sold more than 100,000 copies of his fourth album, England Keep My Bones, which entered the UK charts at No 12 on its release in 2011.

KT Tunstall is no stranger to SA Music fans and has had countless hits on radio with singles such as “Suddenly I See“, “Other Side of the World“, “Black Horse & The Cherry Tree“, “Hold On” and “Saving My Face“. She’s released four albums, achieved 4 million sales, was nominated for the Mercury Music Prize in 2005, won one Ivor Novello and one Brit Award. She’s best known for her incredible live performance and brings it to SA in March for PARKLIFE.

Donavon Frankenreiter has built a very loyal SA fanbase through the surf and indie music scene. As an American musician and surf, and long-time friend of Jack Johnson, his debut self-titled album was released in 2004 on Johnson’s Brushfire Records through Universal Music. He released his 5th Studio album Start Livin’ in 2012 and is the only of the 3 Internationals to also have Durban show added to his SA tour dates. Fans will be looking forward to hearing him perform songs such as “It Don’t Matter“, “Free“, “You” and “Shadows“.

Here’s what went down at PARKLIFE in November 2013

Event details are as follows: